The latest and greatest chapter in massive combat comes to you in the form of Battlefield 3. Get ready to grab your favorite gun, jump in your preferred military vehicle and start mowing down your competition. Battlefield 3 brings a lot to the table that makes it a great game to own, but all great games do have their flaws.
Battlefield 3 is beautiful in that bloody, blow your enemies body parts off, type of beautiful. The graphics are just going to blow your mind. This is easily one of the most graphically pleasing military FPS I’ve seen. So much of this game is astonishing from the highly detailed backgrounds, realistic looking fire, even down to the military uniform textures. This is eye candy at its best. The little details are what I feel really bring this game to life and helps immerse you into the action. Exceptional attention was paid to the textures especially. Not only do you see the strands of cloth in the military uniforms, but the guns, muzzle flashes and the dust that bursts from the treads of an M1 Abrams as it fires. The creators of BF3 really took the time and effort to make sure every bit of this game is visually pleasing. 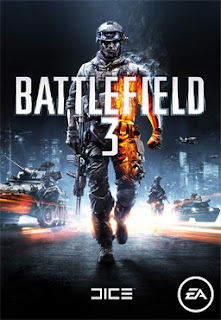 The sound is just as spectacular to the ears as the imagery is for the eyes. The graphics, eye candy, then the sounds in its own right, is ear candy. You are going to be blown out of the water when you hear the sounds and effects of this game in full surround sound. From the bullets whizzing past your head, to the jets flying over and the sound of tanks firing in the distance; it brings you into this almost real world of military warfare.
The multiplayer is out of this world. You get to choose from 4 premade classes that, as you play them more, earn more options for new weapons, optics, specializations and other goodies. When you first begin multiplayer, you are a bit limited but the more you play and the more time you spend on your favorite class, the more you get to modify and tailor make it for you style of play.
One of my favorite parts about BF3 multiplayer is the huge array of military vehicles you can either drive, gun or simply be a passenger in. From hornets to tanks, the options are vast and like playing your class, you can earn more toys for each military vehicle as you spend time in them. The options almost feel completely limitless in multiplayer, with so much freedom to do as you wish. If you’re buying this game for the main reason almost everyone else is, the multiplayer, then you’re in for many hours of time in game and money well spent.
Earlier I mentioned this game is great but does have its flaws. Let’s get to what I feel are the flaws in this game. One thing is how cover sometimes doesn’t really cover you, and at times the computer seems to know exactly where you are without you being in view. I’ve had many hiding places that give perfect cover before any enemy troops ever see me, yet they always manage to perfectly place a grenade under my butt. It does get disconcerting at times but you push through it because lets me honest, all’s fair in war!
The next major complaint I have about BF3, and for me this is a big one, is the single player campaign. Before you say anything, yes I know this game is honestly intended to be about 95% multiplayer and 5% single player. Well, it truly feels like there is about 5% single player in this game. The story is decent but not great, and the overall campaign feels extremely short. First Person Shooters have almost always been about the multiplayer, but I remember long ago when the single player campaign used to be long. Granted finding a great story has always been hard, but at least there was more than a couple hours of single player to keep you occupied. If you’re the type of person who doesn’t do too much with the multiplayer, then you’re better off waiting for this game to hit the bargain bin.
Overall, if you fall into the speculative 95% of players who really buy this game for the multiplayer, you need to grab it and grab it fast. This game is great in almost every aspect and is definitely going to keep you occupied for many, many hours. If you fall into the speculative 5% you might wait to pick it up, unless you plan to really get into the multiplayer. I will say, I tend to not do too much multiplayer, but BF3 has me addicted.
Posted by Thalack at 2:15 AM No comments: