Transformers Prime, the four-time, Daytime Emmy Award-winning series returns for a second explosive season. After defeating Unicron and losing their leader to the Decepticons, the Autobots must now find a way to restore Optimus Prime’s memory and save him from the grasp of the evil Megatron.

Transformers Prime: Season Two brings us an exciting season of twists and turns as the Autobots must race against time and the Decepticons to capture the highly sought after Iacon Artifacts. The race will take us across the world and the universe on a mission to try and save the Transformers home planet of Cybertron. 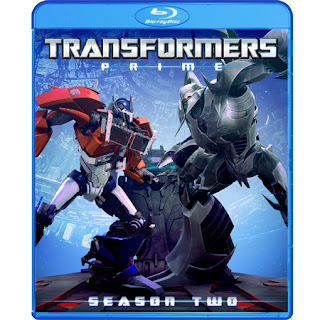 Season one ended with an, “edge of your seat” season finale that made you wonder how they could top it. The writers for the show have not come up short in the least with what they have delivered in season two. Though season two did slow down a bit after the premiere, it was almost a welcome chance to catch my breath. But the slow down wasn’t long as the season quickly took off on the hunt for ancient Cybertronian Iacon Relics. Some, weapons of mass destruction, while others brought hope and a promise to breathe life back into the Transformers dead home of Cybertron.

Season two sees the return of many season one regulars such as Airachnid and Wheeljack. They are welcome characters that add an extra excitement to their episodes and make you wish they could be around for the whole season. Along with them are many newcomers, such as the honorable, yet deadly Decepticon Dreadwing; and the young warrior eager to prove himself to the Autobots, Smokescreen.

Transformers Prime continues to provide great action and compelling story that keeps children and adults alike interested. The intensity of the story reaches a peak in the season finale, “Darkest Hour.” You’ll be on the edge of your seat all the way up till the credits, and then you’ll be stuck waiting there until the premiere of season three to get the conclusion.

The series pleases on a visual level as well. The animation has gotten even better since season one; many things seemed to have improved, from textures, character details and even the smallest details. Battle damage appears on the bodies of the Transformers as they fight, leading to scenes where we see them having repairs done to them to get rid of the battle damage.

Transformers Prime: Season Two is presented in a beautiful 1.78:1 aspect ratio in 1080p resolution. The images are very crisp and clear. With enhanced image quality compared to the regular DVD release, the colors and details in the CG models of the show are more visually appealing. The audio is presented in 5.1 surround sound that fills up the speaker system very nicely. The audio adds an atmospehere to the episodes easily lost on basic 2 speaker setups, almost making it a necessity to have the enhanced sound. Combined, these allow you to be easily submerged into the world of Transformers Prime and make you forget that it’s a TV show.

The Blu-ray has two special features. The first is a recap of season two, with interviews from the producers and directors of the show. They go over many aspects of the show, going into the details of the story, early concept art, and how some events in the series go on longer than planned. The second feature is an interview between Larry King and the voice of Optimus Prime himself, Peter Cullen.

Transformers Prime: Season Two keeps the action going strong, the story compelling and the excitement stronger than ever. Regardless if you’ve seen season two during its time on the air, or have been waiting for this release, it is well worth the purchase price. Definitely a must for any Transformers fan as you keep the opportunity to go back and see your favorite scenes over and over again.

Transformers Prime Season Two releases on DVD November 20 and on Blu-ray November 27.
Posted by Thalack at 12:30 AM No comments: