Who was William aka Thalack to the Gamer, Blog & Transformer Community...William was the strongest person I knew or will ever know!

William was the strongest person I ever knew or will ever know. He fought to live; he loved life & had total belief & faith that he’d make it!
William was from the Omaha Nation - Tapa Clan...he was happy, had a beautiful smile & asked for very little in life. He loved to cook, laugh & had a sense of humor about almost everything. He loved life to the fullest. He loved his family with all his heart without question & gave it unconditionally, but it was his 4 legged girl Mea' who owned his heart. He had good friends who were loyal. He had a good heart, a pure spirit, a kind soul & loved all animals! I don't believe he ever hurt a soul because that was not in his nature. He saw the best in everyone.
‪‪‪‪‪‪‪‪‪‪William was the best son any parent could have been blessed with. We were & still are so very proud of him.
He was a class A computer tech, a published critical review writer, editor, aspiring producer/director, a professional gamer who was a member on one of the top pro teams. AND yes, he was an avid lover of all things Transformers. He loved Transformers from the first cartoon aired to the first transformer figure released. And yes…he was proud to be a nerd! His year was made when he met Frank Welker the voice actor for Megatron & Galvatron at BotCon in IL. He planned his yearly trips to BotCon the day after the last one would end. This year 2015 he had planned to have his transplants and his BIG wish was to jump in the POOl at the 2016 BotCon.
So as you can see, William aka Thalack asked for very little. 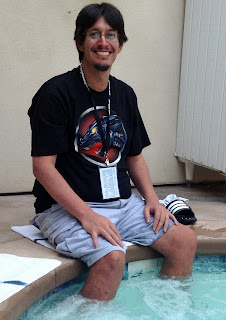 < “Autobots ROLL OUT” “All Hail Megatron”

Follow his story as it unfolds. Learn how things went overwhelming wrong at a top hospital with some of the doctors & nurses associated with the hospital.
Posted by Thalack at 2:52 PM